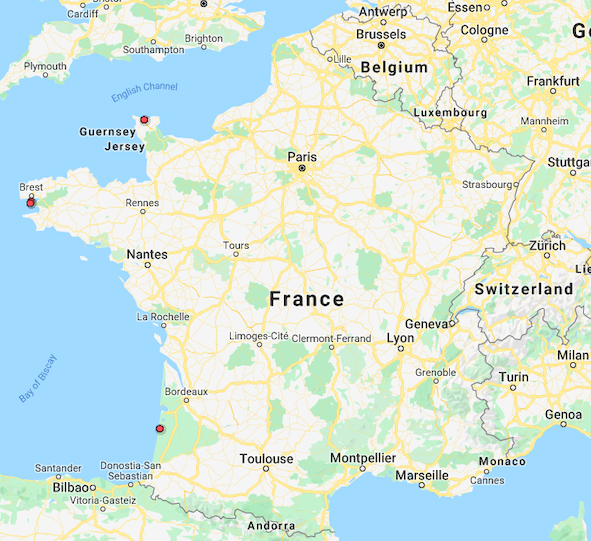 The map shows strategic nuclear forces bases and other facilities that would be included in France’s New START-type data exchange report. You can download Google Earth kmz file for France. For details, see discussion and a model data exchange document in A New START Model for Transparency in Nuclear Disarmament: Individual Country Reports

France’s nuclear force is comprised of sea- and air-based components. The sea-based component consists of four Triomphant-class SSBNs: Le Terrible (2010), Le Vigilant (2004), Le Téméraire (1999), and Le Triomphant (1997). Each submarine is equipped to carry up to 16 SLBMs. The fleet is currently undergoing conversion from the M45 SLBM to the newer M51, with improvements in range and accuracy. The fleet should complete the retrofit process by 2018. Both the M45 and M51 can carry up to six TN75 warheads.

The air-based component consists of aircrafts of three types – two land-based (Mirage 2000N and Rafale F3) and one sea-based (Rafale MK3) nuclear-capable combat aircraft. The Mirage 2000N is currently scheduled to be replaced by the Rafale in 2018. All these aircraft are equipped with the ASMP-A, a medium-range air-to-surface missile, which is armed with a thermonuclear warhead that is reported to have a selectable yield of 20, 90, or 300kt. In the future, the ASMP-A will be fitted with the new warhead used on the M51.2 from around 2015.

Under New START definitions, only France’s sea-based nuclear component would be counted, as the ranges of the nuclear capable aircraft and ALCMs fall below the thresholds for reporting. Therefore, in calculating the aggregate numbers for France, only details associated with the Triomphant-class submarines are considered.The estimated breakdown of New START aggregate numbers for France as of 1 September 2012 is given in the table below:

Three of France’s four SSBNs are considered deployed under New START definitions (that is, they have missiles loaded into their launch tubes). With the exception of Le Vigilant, which was in overhaul at the time of the September 2012 data exchange, all submarines most likely had missiles installed in their launchers. Since each Triomphant-class submarine has 16 launch tubes, France would report 48 deployed SLBMs. Both the M45 and M51 SLBMs are capable of carrying up to six warheads. The exact number of warheads deployed on these SLBMs is not known, so maximum numbers are accounted for in the model report. These factors contribute to aggregate numbers of 48 deployed SLBMs, 288 deployed warheads, and 64 deployed and non-deployed launchers of SLBMs.