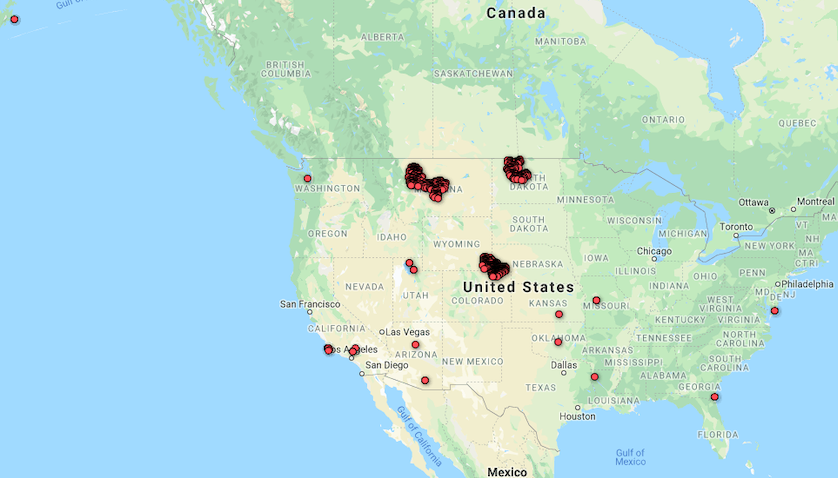 The map shows strategic nuclear forces bases and other facilities that are included in US New START data exchange report. You can download Google Earth kmz file for the United States. For details, see discussion and the data exchange document in A New START Model for Transparency in Nuclear Disarmament: Individual Country Reports

The United States has about 2,000 nuclear warheads that  are assigned to strategic delivery systems, while the only non-strategic weapons that would be considered deployed are the approximately 200 bombs in Europe. As long as the United States maintains its strategic arsenal at New START levels, non-strategic weapons would not significantly distort the picture of US nuclear posture. The case of reserve warheads is more complicated. The United States maintains the capability to add to its operationally deployed arsenal about 2,800 warheads currently kept in active reserve. Although New START does not explicitly limit this capability, reporting under the treaty provides the information that makes it possible to accurately estimate it and take it into account.

In the most recent New START data exchange, the United States declared 806 deployed ICBMs, SLBMs, and heavy bombers and 1,722 accountable deployed warheads. The report also listed the total of 1,034 deployed and non-deployed launchers. The table below provides an estimated breakdown of New START aggregate numbers for the United States as of 1 September 2012 (the number of warheads on deployed ICBMs and SLBMs are estimates; other numbers are taken from the official US report).

For the ICBM component of its strategic nuclear force, the United States reports the status of two types of missiles—Minuteman III and Peacekeeper (MX). However, only the Minuteman III is currently deployed. The nominal US ICBM force consists of 450 missiles of this type deployed in silos at three missile bases. At the date of the data exchange (1 September 2012), one ICBM was removed from its silo, probably for maintenance, so the number of deployed ICBMs was reported as 449.

The unclassified version of the New START data exchange released by the United States does not contain information about the number of warheads on individual ICBMs. It is known that most US ICBMs carry a single warhead and the total number of deployed ICBM warheads is estimated to be 500.

In addition to the 449 launchers that contained deployed ICBMs, the United States declared 108 non-deployed launchers. These include the silo from which a missile was temporarily removed, 100 intact silos that were used to deploy Minuteman III and MX missiles in the past, and seven test launchers. The total number of ICBM launchers is therefore 557. The data exchange also reported that the United States has 321 non-deployed ICBMs (263 Minuteman III and 58 MX) that are located at ICBM bases as well as at storage, repair and production facilities.

The US submarine fleet includes 14 ballistic missile submarines of the Ohio class that are deployed at two bases. Six submarines are based in the Atlantic and eight in the Pacific. Each submarine is equipped to carry 24 Trident II ballistic missiles, which is the only type of SLBM declared under New START as operational.

According to standard procedure of the US Navy, at any given time some submarines are in either long-term overhaul or undergoing repair after patrol, so their missiles are removed from launch tubes. These missiles and launchers are not considered deployed for the purposes of the treaty.

The unclassified version of the New START report does not provide information about the number of warheads on SLBMs. It is believed that deployed Trident II SLBMs carry four to five warheads on average, so on the date of the report the United States had approximately 1,100 deployed SLBM warheads.

According to the New START report, the United States does not have any SLBM launchers for tests or training, so the 336 launchers on 14 submarines give the total number of SLBM launchers. The data exchange also reported that the United States has 180 non-deployed SLBMs. This number includes SLBMs that were removed from the submarines undergoing overhaul as well as reserve SLBMs that are stored at submarine bases and production facilities. It is worth noting that the United Kingdom has access to the pool of non-deployed Trident II SLBMs, so the total number of these missiles in US custody changes from one report to another.

At the time of the signature of the treaty, the United States declared four types of heavy bombers— B-52G, B-52H, B-1B, and B-2A. However, only the B-52H and B-2A can carry nuclear weapons. The B-1B has been converted to non-nuclear missions, so they no longer appear in the New START balance. The conversion was performed according to a procedure specified in the treaty soon after New START entered into force. The B-52G bombers are no longer operational; the aircraft are located at a storage facility, where they are being eliminated. Until this process is completed, the B-52G bombers will be accounted for under New START, even though they are no longer operational.

In its New START data submission the United States declared that as of 1 September 2012 it had 118 deployed heavy bombers (30 B-52G, 78 B-52H, and 10 B-2A). According to the treaty rules, these bombers are counted as carrying a single weapon each. The actual number of nuclear weapons that are assigned to them is somewhat higher, with estimates suggesting that the US bomber force could carry about 300 weapons. In addition to the 118 deployed bombers, the United States declared 23 non-deployed aircraft, which are located at production and repair facilities or are used for tests.