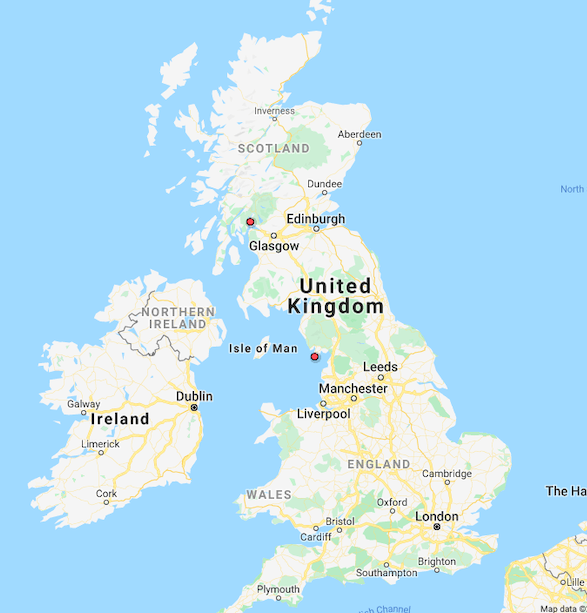 The map shows strategic nuclear forces bases and other facilities that would be included in UK New START-type data exchange report. You can download Google Earth kmz file for the United Kingdom. For details, see discussion and a model data exchange document in A New START Model for Transparency in Nuclear Disarmament: Individual Country Reports

The United Kingdom maintains a solely sea-based nuclear force, which includes Trident II ballistic missiles deployed on four Vanguard-class submarines. The missiles deployed on the submarines are leased from the United States under a sharing arrangement that gives the United Kingdom access to a common pool of missiles. The range of Trident II qualifies it as an SLBM under the New START definition (the United States explicitly reported Trident II as an SLBM that is covered by the New START limits).

Each of the four Vanguard-class submarines—Vanguard, Victorious, Vigilant, and Vengeance—can carry 16 SLBMs, giving the United Kingdom the capability of deploying 64 SLBMs. However, one of the submarines is normally undergoing overhaul at any given time, so the actual number of deployed missiles would be no more than 48. Under the missile-sharing agreement with the United States, the United Kingdom has access to 58 missiles from the pool; as of the end of 2012, 10 of these missiles had been used in flight tests. The United Kingdom apparently operates its submarines at a reduced load. In 2010, the UK government announced that it would implement measures to reduce the number of operational missiles on each submarine from 12 to eight, indicating that the currently deployed submarines carry no more than 12 missiles on board.

To determine the number of deployed SLBMs that would be reported under a New START-type data exchange, it is necessary to take into account that, as of 1 September 2012, one of the submarines (Vengeance) was in overhaul, so it did not have any deployed SLBMs on board. Another submarine, Vigilant, which completed its overhaul earlier in 2012, was undergoing preparation for deployment that ended with a live test fire on 23 October 2012. Given this timing, Vigilant most likely did not have missiles on-board on 1 September 2012. The other two UK submarines most likely had missiles loaded in their launch tubes, so it could be assumed that the United Kingdom would report 24 deployed SLBMs.

There is also some uncertainty about the number of deployed warheads. In 2010, the UK government declared that each submarine is equipped with no more than 48 warheads and made a commitment to reduce this number in the future. In 2011, the Minister of Defence announced that “at least one of the Vanguard class ballistic missile submarines (SSBN) now carries a maximum of 40 nuclear warheads”. This would have to be in reference either to Vanguard or to Victorious, both of which had completed their scheduled overhauls by that time. Therefore, with one of these submarines carrying a maximum of 48 warheads and one carrying a maximum of 40, this would amount to 88 deployed warheads on 1 September 2012.

The total number of SLBM launchers that the United Kingdom would report under a New START-type data exchange would include all 64 launch tubes on its four submarines, regardless of whether or not they contain a missile.

To summarize, if the United Kingdom would report the 1 September 2012 aggregate data as required under New START, it would list 24 deployed SLBMs, 88 deployed warheads, and 64 deployed and non-deployed SLBM launchers. Table below provides a breakdown of the aggregate data. It should be noted that the numbers for deployed SLBMs and warheads are upper-bound estimates. The actual number could be lower.